This is the CIS Girls Club! Only Girls from CIS! Boys are never allowed here!!! Here you can talk with your friends, post storys and more! Have fun!

Who is online?
In total there is 1 user online :: 0 Registered, 0 Hidden and 1 Guest

A Story (Dont know its name yet)

A Story (Dont know its name yet)

Hi People!
This is a story I wrote, it is about an Agent. It is kind of like the book series "Top Secret" I hope you like it

Prologue
Quietly, he walked down the street, careful to always  remain in the shadows. Not to be seen was important in these times. The noise of cars, trains and people intensified as he walked to the main road. A woman in yellow walked past and he quickly jumped back, into the shadows. Suddenly he heard sounds from a small side street. A bad feeling clawed its way into his heart. He knew this feeling, it meant danger, and danger was daily life for him. He slowly sneaked toward the sounds and looked around the corner. Two creatures sat in the sparse light of a broken street lamp. They where talking quietly. He crept closer. Now he could understand some of what they said. "I'm sure. He will fall into the trap.“ Confused, he thought: What a trap? The creature in the light kept talking."He's probably watching us right now.“ He took a step back, and panic rose in him. Suddenly something heavy banned against his head, and the world around him went black. He sunk to the ground. 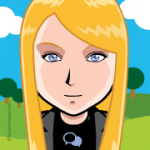